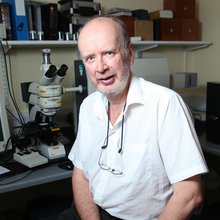 Hugh Barr trained in Liverpool and while completing his post-graduate surgical training under a Wellcome Surgical Training Fellowship he received several medals and prizes, including the Medical Institution Research Medal, the Hopkins Endoscopy Prize British Society of Gastroenterology, The Rogers Prize For Advance in Medicine, University of London, and John of Arderne Medal Royal Society of Medicine.

He also held two named Professorships of the Royal College of Surgeons of Edinburgh, the Lister Professor in 1987–88, and the Huntertian Professor in 1990–91. In 1992 he was appointed as a Consultant General and Oesophago-gastric Surgeon at the Gloucestershire Royal Hospital, Gloucester, also taking up an academic appointment as Clinical Professor of Medicine at Cranfield University in 1994. In 1998 he served as the Director of the Post-graduate Medical School and in 2000 became the foundation Dean of the Faculty of Medicine and Bioscience. His work with clinical trials has resulted in him being appointed Honorary Senior Research Fellow in the Department of Clinical Pharmacology to the University of Oxford. He is the Clinical lead for Research the 3 Counties Cancer Centre in the National Cancer research Network and Cancer clinical Lead in West of England research network.. He is Chief Investigator for the BOSS trial. He is also honorary Professor at Exeter University and at The Royal College of Surgeons of ireland

Professor Barr’s is clinically managing patients and Upper gastrointestinal early cancer using endoscopic method. His research interests are in the area of upper gastrointestinal disease, particularly cancer and its early optical / spectroscopic diagnosis and early treatment. He is in receipt of major research grants from the Department of Health and the Department of Trade and Industry, and the NHS executive for the development of Raman spectroscopy in various fields and is the lead clinician for the National Cancer Research Network in the Three Counties Cancer Centre. He is a committee member of the South West NHS Research and Education Committee, and on the Development Committee and the Gloucestershire Research Consortium. He is the Clinical lead for Research the 3 Counties Cancer Centre in the National Cancer research Network and Cancer clinical Lead in West of England research network.. He is Chief Investigator for the Barrett’s Oesophagus Surveillance Study (BOSS trial)

Author or co-author of over 150 papers in peer-reviewed journals and 25 book chapters, Professor Barr is also active in national professional associations. A Fellow of the Royal Colleges of Surgeons of London and Edinburgh, he currently serves as a councillor and secretary of the British Medical Laser Association, and has been elected to the Council of the British Society of Gastroenterology (2005) and the Oesophageal Section (2005) and former member of the Endoscopy Committee of the British Society of Gastroenterology. His provides advice regarding endoscopic therapy in the oesophagus for the NICE.