We cover all types of cancers, pre-cancerous and haematological conditions from those with radical intent through to palliative. We work with the haematologists, oncologists, surgeons and allied health professionals involved in cancer diagnosis and treatment as well as a range of supporting departments like the laboratories and radiology.

Our Cancer and Haematology Clinical Trials team covers both Cheltenham General and Gloucestershire Royal Hospitals, working in Chemotherapy Outpatients, the Edward Jenner Unit , the main outpatients on both sites, radiotherapy department and on the cancer inpatient wards at Cheltenham General. The patient-facing side of our team is divided into three mini teams, each led by a Band 6 Senior Research nurse/coordinator, covering commercial trials, academic oncology trials and haematology malignant and non-malignant conditions and lymphoma trials respectively.

The LINC charity has kindly funded the Band 6 senior research nurse/coordinator post for the haematology & lymphoma team. The support from the LINC charity has increased capacity in our team which has led directly to the expansion of the haematology and lymphoma portfolio and increased the number of patients entering research projects. A few of the trials have allowed clinicians and patient’s access to medicines that previously were unavailable in Gloucestershire.

We have a fourth mini team concentrating on the data/admin side of clinical trials, led by Band 4 Senior Data officers. The data requirements within cancer trials are especially complex and can last for longer than 10 years. 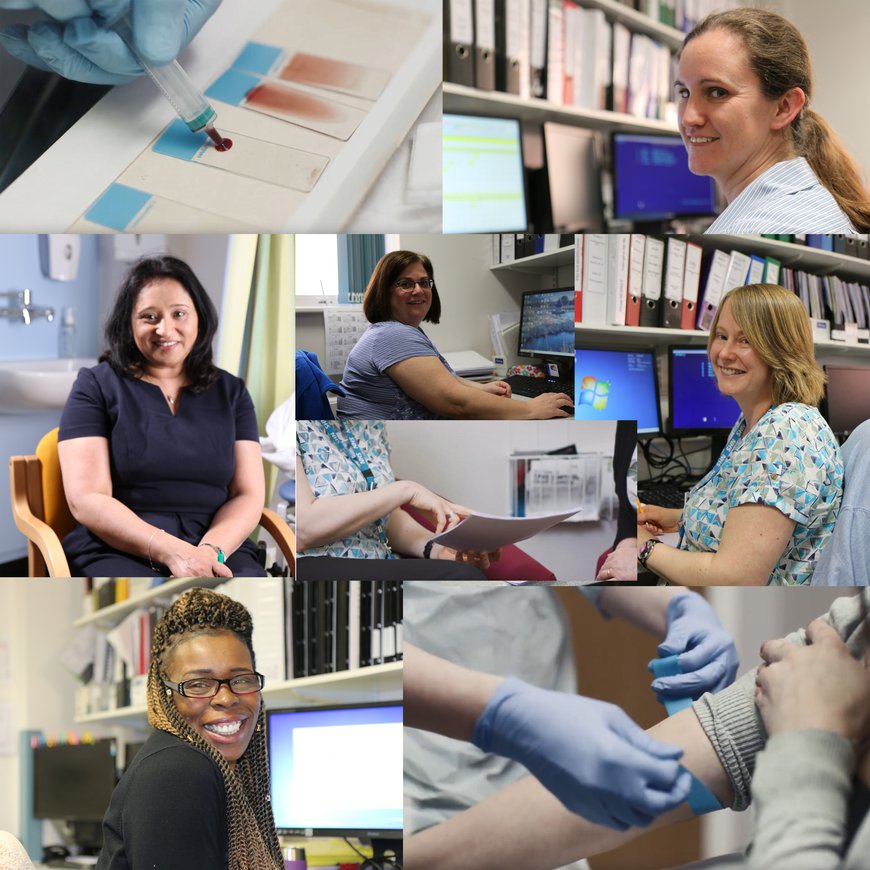 We cover all types of cancers, pre-cancerous and haematological conditions from those with radical intent through to palliative. We work with the haematologists, oncologists, surgeons and allied health professionals involved in cancer diagnosis and treatment as well as a range of supporting departments like the laboratories and radiology.

Part of the team is based in the FOCUS Research unit in Cheltenham, a purpose-built unit funded generously by the FOCUS charity. This unit allows us to provide a welcoming environment for patients in what, is often a very stressful time in people’s lives. The unit consists of two clinical rooms, a small seating area for conducting patient dialogues, and office space. We hold a designated trial follow up clinic on the 1st and 3rd Friday of the month, as often the trial protocols stipulate more complex clinical follow up than the standard pathway, which without this clinic would be very difficult to coordinate and achieve.

Our team based in Gloucester has office space in the Orchard Centre but sees patients in the Edward Jenner Unit as well as main outpatients. The team in Gloucester support a weekly consultant-led haematology research clinic. This clinic sees patients from the start of their trial journey from screening to completion of treatment.

We currently have 37 trials open to recruitment with over 60 trials in follow-up. Some examples of the trials we are currently involved in, Add-Aspirin trial looking at whether adding aspirin after standard treatment will bring benefit, and AML 18 & 19 inpatient based trials for patients over 18 fit for intensive chemotherapy for Acute Myeloid leukaemia. AML 18 and 19 trials involve many newer treatments that require input from the wider hospital team including the inpatient nursing team, the haematology CNS team, pharmacy and the labs. We would not be able to successfully support all the cancer trials we do without the support of the wider hospital team, like the Chemotherapy outpatients and Edward Jenner nursing teams who provide the resource to deliver these trial treatments to patients as part of gold-standard NHS care.

We have a number of trials comparing conventional chemotherapy with newer, biological therapies, for example ENRICH is the only clinical trial of its kind to offer patients a first line treatment for Mantle Cell lymphoma that does not include a conventional chemotherapy. Working with radiotherapy we have supported trials which have gone on to change policy like the HeartSPARE trial or allowed radiotherapy department to work with newer techniques like the PACE trials, stereotactic radiotherapy for prostate cancer.